On September 7, Tom Zinnen will be giving the talk entitled “The Stories Behind the MIA Project’s 2022 Recovery Mission in Belgium” based on the team’s work from June 26 to July 19 searching for the remains of a missing-in-action airman at the crash site of a US Army Air Force bomber shot down in Belgium in 1944.

Description:  Launched in 2014, the Missing in Action Recovery and Identification Project of the Biotechnology Center works to recover, identify, and repatriate MIA U.S. service members by conducting annual field excavations and year-round research assistance to families of missing service members. The project consists of an interdisciplinary team of academic experts and student volunteers in the fields of history, archaeology, forensic anthropology, and biology, collaborating to make these missions possible.  The project has identified the remains of three servicemembers:  PFC Lawrence Gordon in 2014, Lt Frank Fazekas in 2017, and 2nd Lt Walter Stone in 2018.

In the summer of 2019, the team initiated a recovery mission of an MIA crewmember of a US bomber shot down over Belgium in 1944.  The covid pandemic prevented the team’s return to Belgium and completion of the search until June & July this year.  Zinnen will share his experiences and observations as part of the team in Belgium this summer and include a comparison to the team’s excavation in France in 2016, in which he also participated.

Bio:  Tom Zinnen leads the BioTrek Public Outreach Program at the UW-Madison Biotechnology Center, and he is also a Biotechnology Education Extension Specialist with the Division of Extension, Wisconsin 4-H.  He studied biology at UW-Platteville, earned his master’s degree in plant pathology at the University of Illinois at Urbana-Champaign, and got his Ph.D. in plant pathology from the University of Wisconsin-Madison.  After a post-doc at Agrigenetics Corporation in Madison, he spent six years at Northern Illinois University before returning to UW-Madison in 1991.  He was a Congressional Science Fellow on the House Committee on Agriculture staff in 2000-2001 and was on leave in 2008-2010 as a speechwriter for the director of the National Science Foundation.  Along with Sarah Schutt of the Wisconsin Alumni Association, he launched Wednesday Nite @ The Lab in 2006 and continues to serve as the WN@TL emcee. 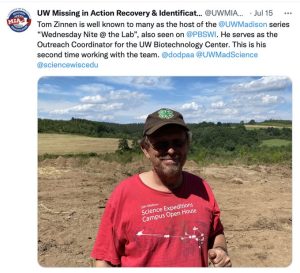